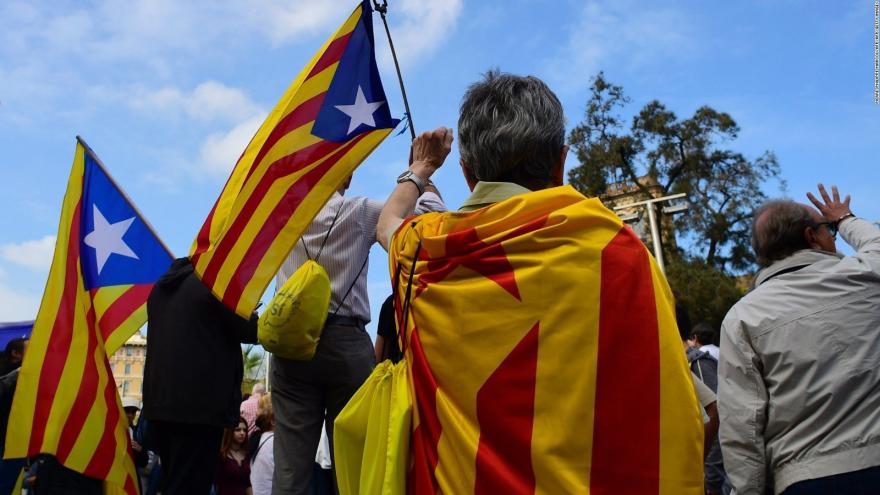 (CNN) -- The former leader of Catalonia urged Madrid to enter political negotiations following a regional election that gave pro-independence parties a majority in the Catalan parliament.

"We are a democratically mature country that has earned the right to become a republic of free men and women," said former Catalan President Carles Puigdemont.

In a recorded address made from self-imposed exile in Brussels, Belgium, Puigdemont appealed to Spanish Prime Minister Mariano Rajoy to accept the election results.

"The ballot boxes have spoken, democracy has spoken, everyone has been able to express themselves. What is Rajoy waiting for in order to accept the results?" Puigdemont said in a speech posted Saturday on social media.

It's unlikely Rajoy will be receptive to the appeal. He has refused to meet with Puigdemont, who went to Brussels after Spanish authorities announced they were seeking his arrest. Rajoy says he will meet only with leaders of the pro-unity Ciutadans (Citizens) party.

The Spanish government called the early regional election for Catalonia in the hope of quelling the separatist movement, whose push for independence this year triggered the crisis.

That ambition, however, was thwarted when voters backed the three pro-independence parties. Ciutadans, known in the rest of Spain as Ciudadanos, came in first in the December 21 election. However, its 37 seats are not enough for it to form a majority government.

In his video message, Puigdemont stands in front of the Catalan and European Union flags.

"The Spanish government has a new opportunity to behave as the European democracy it claims to be and therefore recognize the results of the elections that took place on December 21," he said in Catalan, "and in this way to start a political negotiation with the legitimate government of Catalonia."

Puigdemont called the 82% voter participation rate a "historic" success and accused Rajoy of using "repression" and "intervention" as a way to deal with the separatist movement.

Millennials in the region appear to back independence. An opinion poll by the Center for Opinion Studies in Catalonia found that more than half of Catalans between the ages of 18 and 34 would vote to break away from Spain given a simple choice of yes or no.

Friday, Rajoy told reporters that he will call on Catalonia's new Parliament to hold its inaugural session on January 17.

Rajoy called for "constructive dialogue, open and realistic, always within the law."

Analysis: No mood for compromise after close vote

The Prime Minister said: "I hope that Catalonia will be open, from now on, to a phase of open dialogue, not confrontation, of cooperation, not imposition, and plurality, not unilaterally."

Rajoy last week said the results showed a decline in support for pro-independence parties since 2010, although "not as much as we wanted." The leader remains under pressure after the vote made it clear that there is no easy way out of Spain's worst political crisis in decades.

For his part, Puigdemont was pushed from power after his government held an illegal independence referendum October 1 and lawmakers unilaterally declared the region's independence from Spain.

Following Catalan lawmakers' declaration of independence, Madrid dismissed the entire Catalan government and Parliament and seized control of the region.