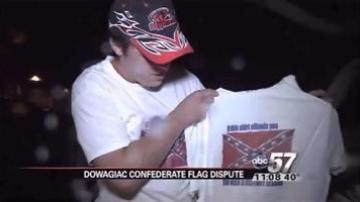 There has been outrage, hurt feelings, and death threats after a student was suspended last Friday for wearing a belt buckle with the Confederate flag on it.

On Monday, a handful of students wore Confederate flag T-shirts in retaliation, and they too were suspended.

On Wednesday, dozens of students went to school in protest, wearing T-shirts with a Confederate flag on them. The students either left school on their own, or were sent home for fighting back against the school. School officials say wearing anything with the Confederate flag on it is violation of the dress code.

The school stands by its dress code policy and students were again warned on Wednesday that they would face expulsion if they wore anything that displayed the Confederate flag on it.

While students and their parents say it is just about principle and fighting for their Freedom of Speech, there is no doubt that this protest has the community divided.

Many people in the community say they understand that everyone has the right to voice their opinions, but they say students are walking a very thin line when it comes to racism and doing something that could offend someone.

That is what Angelique Ware immediately thinks of when she sees someone wearing or flying the Confederate flag. She has four kids, all around high school age. Although they do not attend Dowagiac Union High School, they do compete against student from that school in sports.

"To see their friends or classmates wearing something like that, to me, it really hits home," said Ware.

That is because her kids are interracial, which is why she worries about what kind of message these students are sending.

"Why are they doing this? Is it really for the rebellion aspect, or is it because they are having problems with racism at school?"

Ware hopes the latter is not the case. She says diversity is important to her and it was something she considered when choosing which school her kids would attend.

"We live in Benton Harbor, but we bus our kids into Berrien Springs because it is such a diverse school," said Ware.

She says she supports the school’s decision to ban the Confederate flag from the dress code, and also says any other reaction to the controversial symbol would be unacceptable.

"If I knew the school system was okay with flying that flag, my kids would definitely not attend that school."

Angelique says this sort of thing is something she would never expect to happen here in Dowagiac, and added that she is very concerned about why students at the high school feel so strongly about expressing themselves this way.