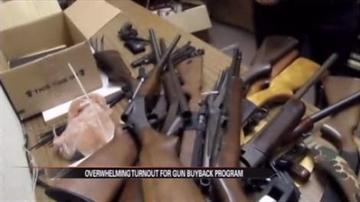 NEW ALBANY, Ind. -- It was a plan to get guns off the street but it didn't take long for an Indiana city's "Gun Buyback Program" to run out of cash.

That's thanks to the overwhelming turnout in New Albany.

The city offered to pay $200 for each pistol, shot gun, and rifle and another $300 for assault-style weapons.

An early line forced officials to set a limit on the buyback for certain weapons. Sellers only had to prove they were New Albany residents to sell their guns, no questions asked.

"You got to make something like this more inviting than you do for the person who wants to buy a gun that can't actually own a gun, the convicted felon or whatever, so if we can offer more than what you make on the street, then that's our goal," said Major Keith Whitlow, gun buyback organizer.