Owner of collapsed structure failed to comply with city request 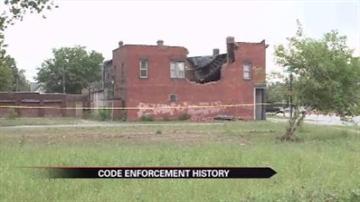 SOUTH BEND, Ind. -- South Bend Code Enforcement records show two people own the building that collapsed early Monday morning off Lincolnway West. Records indicate one of the owners complied with requests to make repairs to the building or face fines – and the other didn’t.

They were dumbfounded why they weren’t called when the building collapsed.

"It's important that we are there to make sure the public is safe,” said Jim Markle, County Building Department.

They're scrambling to figure out if the whole building needs to come down or just the portion that has this huge gaping hole in it.

"The building department has been out there. They are not sure, so we are basically waiting on the expert to tell us whether or not that building is adjoin situation or if it's a situation where we just need to take down the whole structure,” said Brian Haygood, Chief Code Inspector.

Haygood says in August of last year, a fire inspector noticed some major safety issues with the building and that prompted code enforcement to get involved.

"The one owner did come to the hearing stated that it wasn't his building, which he was correct, but however the issues we knew that there could be issues having it not addressed and could potentially pose a problem on his property as well,” said Haygood.

Building permits show he put on a new roof and new windows several years ago.

The person who owns 1021 and 1023 failed to address code enforcement violations and concerns about the deteriorating structure.

"Knowing that we had an issue with the one wall it deteriorated and the roof the roof structure had deteriorated to a point where it needed to be repaired,” said Haygood.