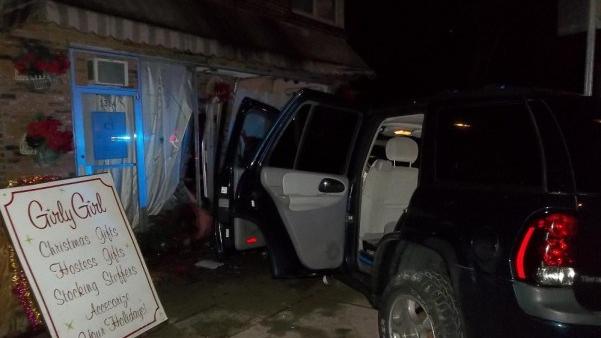 A man fell asleep at the wheel on Christmas and crashed his SUV into Girly Girl Gifts and Accessories in South Bend. Police said the driver wasn't injured, but the owner said it's a big hit for her business.

Cynthia Basker is estimating that the damage will cost thousands of dollars. She said the structure is damaged and she also operated an event planning company called Celebrated Events at the same location. Basker said her parents own the building and it was devastating for them on Christmas.

Basker said, “To come here and see the devastation, it was pretty tough. It was really hard. And it's still hard. We can't pick things up or move anything around just yet. We're waiting for the insurance adjustors to come.”

It all happened around 3a.m. on Thursday in the 1300 block of Mishawaka Avenue.

Basker said her world has been turned upside down.

Basker said, “I love my little shop and I'll definitely reopen and hopefully things will be better than they were before and I just have to look forward and look to the future and just believe that this happened for a reason and trust that that reason will be good for me and good for my little shop.”

Basker said her store is closed for cleanup, but she is still operating online at www.girlygirlgifts.net. Basker said she's thankful that no one was injured because there are several apartments upstairs too.

Basker said, “I was told that the airbag saved his life. And basically he just walked away from the whole thing. So if there's a good think about this whole entire thing it's that he was not harmed and he just walked away. So I'm grateful for that.

A friend also set up an Go Fund Me account for Basker during this difficult time, here is the link: http://www.gofundme.com/GirlyGirlGifts