Pair convicted of forging signatures to be sentenced in June 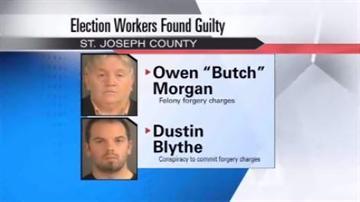 Two former democratic leaders were convicted Thursday of forgery after the jury deliberated just three hours. The pair will be sentenced June 17th for forging signatures on petitions to get Obama and Clinton on the ballot.

Guilty on all counts.

That's the ruling that could put two Saint Joseph County democrats behind bars.

Former democratic chair Butch Morgan and registration worker Dustin Blythe were convicted of conspiring to forge signatures in a petition in the 2008 primary.

The trial sparked many changes for the party.

"We've made significant changes in the voter registration office, both from a personnel standpoint as well as policy and procedure standpoint,” said Senator John Broden, St Joseph County Democratic Chairman.

Broden took over when Morgan resigned back in October of 2011.

He says the party moved past this case a long time ago. Now it's focusing on security.

"Every single signature that was submitted in 2012, every candidate running for statewide office, every signature was reviewed and scrutinized,” said Broden.

The republicans say they didn't throw a party following the ruling, but they are glad it's over.

"The public trust and the electoral system were compromised and violated. When that happens- when people lose trust in the system- the system stops working,” said Jacob Teshka, Executive Director, Saint Joseph County Republic Party.

He says GOP leaders hope this raises the bar and deters future corruption.

“We're hoping that the democrats will join with us from this point in raising the bar and expecting more from our elected officials, our candidates, our party leaders and our party workers,” said Teshka.

Broden says he wants voters to remember that no official has been implicated or put into office due to this act of forgery.

There were enough valid signatures in that petition for Obama and Clinton so this did not alter any political outcome.

Morgan and Blythe each face between 10 and 75 years in prison.