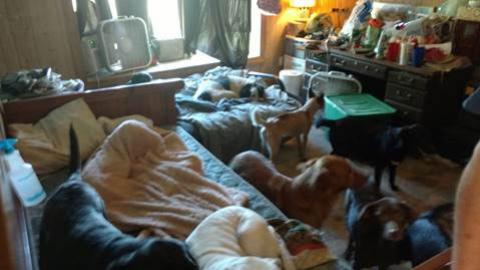 Two people were arrested and 117 animals were seized during an animal hoarding investigation by the Van Buren County Sheriff's Office.

The sheriff's office began investigating last week into a report of animal hoarding at a residence in the 56000 block of 52nd Avenue in Lawrence Township.

While investigating, deputies said they found over 100 dogs and numerous other animals on the property.

Deputies said because many of the animals were not being cared for properly, they obtained a search warrant for the property and arrest warrants for the owners of the animals.

When the search warrant was served on Tuesday, June 28, it took 10 officers over eight hours to remove 108 dogs, 8 cats and one horse, according to deputies.

Each animal was tagged, photographed and checked for visible health problems or injuries.

Deputies said many of the animals were underweight, had mange, fleas and deformities or injuries.

Because there was animal waste everywhere in and out of the home, there was a lack of food and water for the animals, it was a health hazard for both the animals and the humans living in the home, deputies said.

All the seized animals are being cared for by the Van Buren County Animal Control Division and other rescue organizations that have reached out to assist.

Local veterinarians are caring for the animals.

The Van Buren County Animal Control Division will be working with the Michigan Humane Society to assist in this ongoing investigation.

40-year-old Donald Frederick Smith and 45-year-old Melissa Kay Copen were arrested on a preliminary charge of animals - abandoning/cruelty to 10 or more animals.

Both are being held at the Van Buren County jail on $2,500 cash bond pending arraignment.