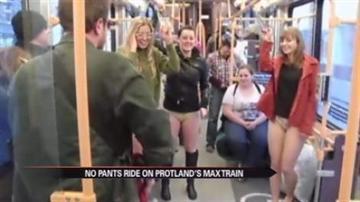 PORTLAND — In some cases, it may get a person arrested, but riding the train without pants in one Oregon city was actually encouraged.

Hundreds of people braved the cold for the "No Pants Max Ride."

Organizers said the event was just a way to have fun.

"As long as I'm having fun, that's all that matters," said Richard Hick. "If someone can get a good laugh out of it or text their friend like 'Oh my goodness, I saw a person in their underwear, I saw hundreds of people in their underwear' why not?"

Portland was not the only city to go pantless on Sunday.

More than 600 people also participated in San Francisco. And it is estimated that a couple of thousand took part in New York.