Papa Johns near stadium serves up 950 pies during game 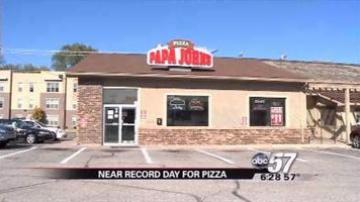 SOUTH BEND, Ind. -- The Notre Dame - USC game was close to a record-breaker for one local business!

The Papa John’s restaurant, located a few blocks from the stadium, made 500 pizzas during a three-hour period after the game.

For the entire day, it made 900 pizzas, just shy of its all-time record. It was just two years ago when they made 950 pizzas during the USC game!

"It was very exciting! We love Notre Dame Football. It's great for business and it was a little chaotic after the game. Our first night game we have had in our 20 years of being in business,” said owner Alison Patton.

Papa John’s managers told us they think they were so popular after the game, because a lot of other restaurants had already closed.