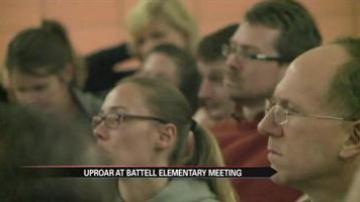 There was a packed crowd of concerned parents at the Mishawaka school board meeting Wednesday night.

Mishawaka schools are $6 million in debt, and with property taxes lowering, that deficit could quickly turn into $8 million.

Board members addressed potential cost-cutting measures, including a proposal to turn Battell Elementary school on E. Broadway into an all-kindergarten institution.

This change would force all students in other grades to transfer to other area schools, an idea that's left some parents upset.

"We love Battell, and we are very discouraged at the prospect of you re-purposing our neighborhood school into a kindergarten-only campus," said Battell parent Lucinda Habel. "Sending our children into whatever school you can shoehorn them into."

Superintendent Terry Barker estimates that the plan could save the district $500,000 annually, due to the decrease in staff and supplies.

Other potential cuts the board is also considering include getting rid of select freshmen and middle school sports as well as the elementary school orchestra.

No official plans have been put into place yet. A final decision isn't expected to be made until late-March or early-April. If any of the proposed cuts are approved, they'll take effect next school year.