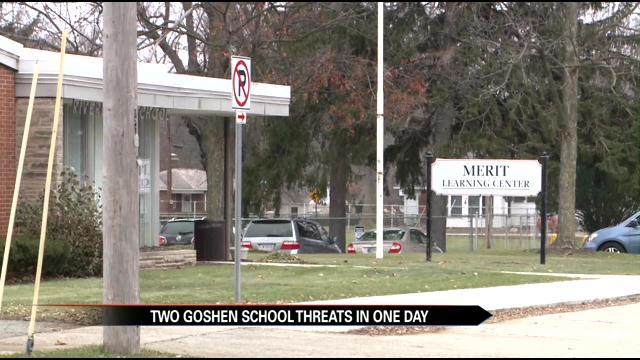 Parents of students at the Merit Learning Center in Goshen are concerned about two incidents that occurred on school property on Monday.

The Merit Learning Center has students as young as infants up to 12th graders.

Parents say they had no idea two crimes were committed at their child's school Monday.

“It would have been nice to know what was going on and that the kids were safe and everything,” said parent Thea Elswick.

A written bomb threat was discovered on a boy's bathroom wall.

The school's principal Kristen Watt says she had all the students evacuated by 10:10 a.m.

Police and K-9's searched the property and didn't find anything.

“No I didn't hear anything about that, I should have been called or something,” says Elswick.

Elswick's daughter, who is in 11th grade, took home a letter about a different incident.

The letter said around 2 p.m. a student reported that they saw a classmate showing off a BB gun to a group of others while on school property.

Police were notified and students were disciplined.

When asked if she still feels safe sending her daughter to school Elswick says,“Yep because I know the doors are locked and everything. Just the students bringing stuff in is what scares me.”

“Like I said I would have liked to have been informed as to what was actually going on at the time," said Elswick.

Going forward with the students' safety, Principal Watt says this is the first year in her 9 years with the school that she encountered a bomb threat or a weapon on school property. She also adds that the school does not have have the resources nor does she feel there is a need to invest in safety precautions like metal detectors.
Share this article: