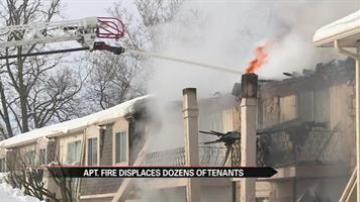 Welker says he saw the smoke first and then saw the fire trucks.

In the last year and a half, firefighters have been called out at least three fires at the Park Jefferson Apartment complex.

"We as humans and tenants of the complex, we just got to be a little more consciousness of what we're doing," said Welker.

"It happens. There's a lot of different complexes in the city that we go to multiple times. It just seems that Park Jefferson has one where the fire does get to be a little larger than normal fires," said John Corthier, Assistant Chief of the South Bend Fire Department.

Fire investigators say they don't know what sparked the fire yet, but they do know that the damage could've been a lot worse.

"It's a wall that's fire-rated that'll contain the fire just to a certain location," said Corthier.

That along with a quick response from emergency responders likely saved 24 surrounding units from damage.

Still it's a reminder that tenants should be careful.

"I don't know what happened here with this one, but I know in other cases - we've had human error," said Welker.

"I think it's a matter of fire safety and that they impress upon the residents how important it is to promote fire safety, and keep everything fire safe in the building," said Corthier.

Representatives with the complex said the previous fire incidents have almost always involved someone leaving something unattended.

South Bend fire crews are on scene of a fire at the Park Jefferson Apartments.