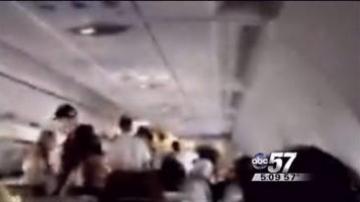 A JetBlue pilot was restrained on Tuesday for have a breakdown on a flight headed to Las Vegas from New York.

Cell phone video taken from inside of a JetBlue plane shows the pilot acting erratically. The plane had to land in Amarillo, Texas for what the airline is calling "a medical situation involving the captain."

Passengers say he started yelling things like “bomb” and "we're going down” and he also said something about Iraq and Iran.

A group of men restrained him. Passengers say they're grateful for the copilot.

"Actually you know what? The person that should be credited is the copilot that was there,” said David Gonzales. “He changed the code on the door. He didn't let him back in."

After landing the captain was transported to a hospital for evaluation.