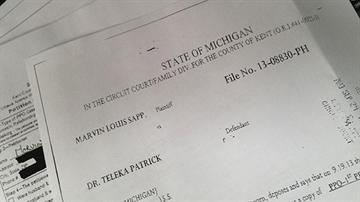 BERRIEN SPRINGS, Mich. -- Sunday a body was pulled from Lake Charles in Porter Township, Indiana. The body was found less than a mile from where 30-year-old Teleka Patrick's car was found four months ago.

The family's private investigator, James Carlin, says although they don't know what happened to Teleka, some clues might be in the restraining order filed by gospel singer Marvin Sapp.

Sapp is the Pastor of Lighthouse Full Life Center Church in Grand Rapids; the church Teleka was attending when she first moved to Michigan.

She had to leave the church when Sapp filed a restraining order against her and told her she needed to find a new church home.

In the restraining order, Sapp accuses Teleka of moving to Michigan to stalk him. He says she's shown up at his house, contacted his children, and tried to reach him over 400 times.

Carlin believes Sapp may have had something to do with her disappearance.

"I would not exclude the possibility. The sheriff's department continues to say to the Patrick family that Mr. Sapp was not involved in this, he may have been traveling. I don’t know what his itinerary was on that particular day, but that does not mean that somebody else acting on his behalf or anybody else’s behalf might have done something."