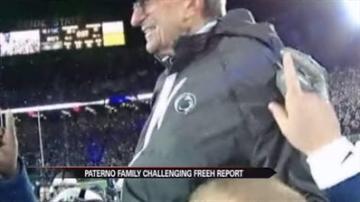 A new report from Joe Paterno's family challenging the Louis Freeh conclusion about the Penn State sex scandal has come out.

An executive summary of the critique said the observations of Paterno by Freeh in July were untrue.

One of the experts the Paterno family's lawyer hired called the document "fundamentally flawed" and incomplete.

That report did a "disservice" not only to Paterno but the university community.