Paychecks frozen for many members of Indiana National Guard 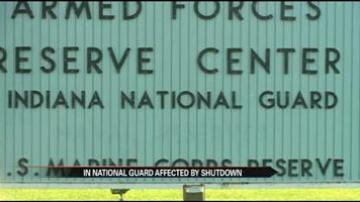 "The federal technicians were allowed to come in for a maximum of four hours to sign their furlough notice and to pass off any critical information to someone who will be here,” said Lt. Col. Cathy Van Bree, public affairs officer, Indiana National Guard

Thanks to Governor Mike Pence, the state will continue paying 244 guard staffers, who are state employees, for at least a week. But after that, the paychecks freeze. It’s something that has one mother of two very upset.

"My son just got back from drill last weekend and my daughter went the weekend before that and neither one of them will be getting paid for their drill weekends,” said Christlina Brown, mother of two National Guardsmen.

Those traditional guardsmen, called weekend warriors, get paid for drill weekends. Brown says her two children will be waiting at home.

"They've got car payments. They've got doctor bills. They've got insurance, cell phone bills, rent and food. How are they going to do that if they're not getting this money that they've worked for?” said Brown.

And what happens if a natural disaster occurs during the shutdown? Do the guardsmen deploy or stay at home?

“If a national or natural disaster occurred either nationally or statewide, we would definitely have to coordinate with the governor and his staff to figure out exactly how we could execute a deployment and under what funding status,” said Van Bree.