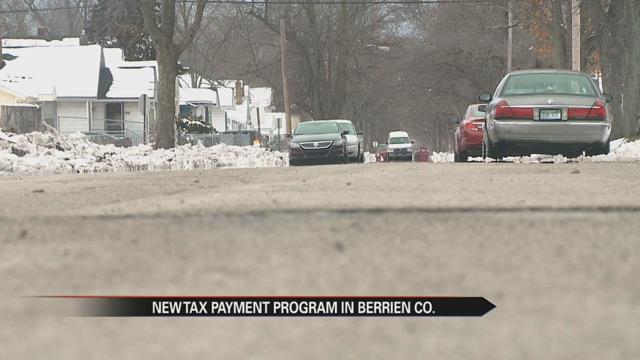 Hundreds of people facing foreclosure in Berrien County may be saved by a new program the county treasurer has created.

“The county would much rather have the money than the property because our ultimate goal is to collect the tax, not be a landlord in Berrien County,” Berrien County Treasurer Bret Witkowski said.

So Witkowski is hoping a new payment plan system will help keep hundreds of Berrien County residents from losing their properties to foreclosure due to unpaid taxes.

“We talk to them in private and try to work out something that will satisfy the debt that’s owed, plus give them the peace of mind that they’re ok,” Witkowski said.

That’s part of Witkowski’s strategy, as he hosts weekend events across the county.

The plan allows participants between seven and nine months to pay off property tax debt owed from 2013. If 2013 taxes are not paid by March 31, 2016, foreclosure is possible.

“This is the first year we’ve done [the program] and so far, the success has been pretty good,” Witkowski said.

Nearly 50 percent of property owners facing foreclosure in Niles showed up at an event at their local library and received payment plans recently.

And in the Buchanan area, about 40 percent of landowners did the same thing at their own event.

Next up is Benton Harbor and Benton Twp., where 700 properties possibly face foreclosure. Witkowski and his staff will hold a meeting at the Benton Harbor Library on Saturday, Feb. 26 from 11 a.m. to 2 p.m.

“We do have quite a few [people] already in that area in payment plans, 120 , as of [Thursday],” Witkowski said of Benton Harbor and Benton Twp. “That is a good percentage of the 700, so if we get another hundred out of that [Saturday], I’d be very happy.”

Witkowski said between 300 and 325 properties are foreclosed in Berrien County each year, which add up over time because the county has 85,000 properties in all.

Witkowski said that getting on a payment plan will allow people to not only catch up on their bills and keep their properties, but it will benefit them in the long run because they won’t keep paying high interest in penalties.

“And, you know, that’s money that could be spent for home improvements, medical bills, the economy in general, that is [instead] spent on interest and penalty,” Witkowski said.

Witkowski said the payment plan option is not meant to be intimidating.

“We’re not gonna put anybody in a written payment plan that does not get them caught up,” he said.

And he added that the payment plan is something to feel proud of taking advantage of, rather than feeling ashamed.

“Everybody has a story behind why they’re here,” Witkowski said. “And when they get out of, what I like is it’s on their own and there’s a sense of accomplishment that they’re doing it.”

Witkowski also said that these payment plans are not a handout and that they offer no special breaks or discounts. He said it’s simply an extension to help people get caught up.