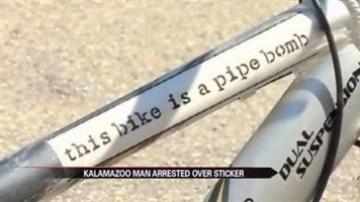 KALAMAZOO, Mich. -- A man involved in peaceful protest has landed in jail.

The man says it was all a misunderstanding over a sticker.

Kalamazoo police arrested Lee Holdridge last month for having a sticker on his bag that read "this bike is a pipe bomb."

Officers thought he was making a bomb threat.

What the officers did not know was the it was actually the name of a band.

"I looked around and I go really, four guys, SWAT team, took us down violently," Holdridge said. "I was shocked and intimated. I think it was done to be mean spirited and teach us a lesson."

Holdridge is charged with disturbing the peace.

The prosecutor offered to drop the case if he did community service.

But Holdridge says he will take his chances at trial.