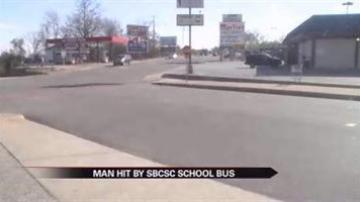 SOUTH BEND, Ind. -- A pedestrian was sent to the hospital after police said he was hit by a South Bend school bus.

It happened Monday morning around 7 a.m. on Portage Road and Elwood Avenue. A police sergeant told ABC57 News that the man was in the pedestrian area when he was hit by a bus as it was turning.

He didn't want to go on camera but he said the video clearly shows the bus driver was turning west onto Elwood when the accident happened.

Police said the pedestrian, 59-year-old Kenneth Reynolds, had the right of way in this case.

He was almost to the other side of the road when he was hit by the bus.

Reynolds is listed in critical condition at the hospital.

The bus driver is on two days paid administrative leave until the investigation is complete. South Bend Schools said that is standard procedure after an accident.

The students who were on board the bus were sent home with a letter explaining what happened. Counselors were available to those students if they needed to talk to someone about the incident.