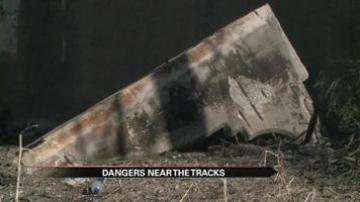 SOUTH BEND, Ind. -- Joggers, bicyclists and drivers say they are worried for their safety after discovering a massive piece of concrete fell off a railroad bridge in South Bend.

The chunk of concrete came off the Grand Trunk Western bridge near the St. Joseph River.

The piece that fell off is about half the size of a car and is extremely heavy.

Nathaniel Walker wants someone to fix the bridge.

He and others are worried it's only a matter of time before another chunk breaks off.

"It could be a heavy train, and it just might happen to fall on some joggers or some walkers, even me," said Walker.

"They're making money transporting back and forth. They should pay for upkeep of that as well," said Matt Savage.

Canadian National Railroad, the owner of the rail line, says they inspect bridges every year. They are in the process of getting the permits needed to make repairs.

Jogger Jack Adams has noticed cracks on the other bridge brackets. It is his favorite route, but says it makes him nervous.

"It's one of those things where you don't want to cross that bridge when you come to it, because it might kill you," said Adams.

"Now I do second guess myself for walking under this bridge," said Savage.

Inspectors were sent out Monday to take another look at the bridge. They said they will make repairs once they get the necessary permits.