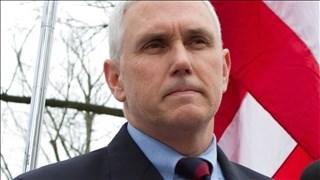 Indiana Governor Mike Pence signed a measure Thursday that would allow businesses to turn away members of the LGBT community from their stores in the name of religious freedom.

Governor Pence signed the bill in a private ceremony, but was flanked by an array of supporters, including the bill's author in a picture Pence tweeted.

Michiana supporters say the bill is crucial when it comes to protecting their religious rights.

“As a Christian, I show love, compassion, mercy for anyone. I do not have a problem with anyone coming to my business no matter who they are, what they look like, or what they do in their life. It doesn't affect me. However, I do still reserve the right to refuse service to anyone,” says Snag-A-Pro owner Mike Strauss.

In a written statement, Pence defended his decision to sign the bill, even pointing to the University of Notre Dame's case against the Affordable Care Act's birth control mandate saying, “The Constitution of the United States and the Indiana Constitution both provide strong recognition of the freedom of religion, but today, many people of faith feel their religious liberty is under attack by government action. One need look no further than the recent litigation concerning the Affordable Care Act. A private business and out own University of Notre Dame had to file lawsuits challenging provisions that required them to offer insurance coverage in violation of their religious views.”

In St. Joseph County, organizations say they are protesting this new laws by encouraging boycotts.

The St. Joseph County Democrats said they will publicly condemn any business that supports the law.