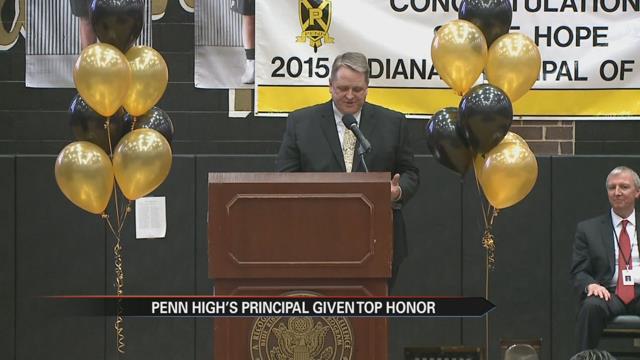 The Penn High School community is celebrating because their principal just received the state’s top honor.

Thacker was in attendance Tuesday afternoon when the entire Penn High community gathered in the school’s main arena to celebrate Principal Steve Hope.

As the school band played, Hope was officially honored as the 2015 Indiana Principal of the Year.

“He’s a role model,” Thacker said. “He comes into work every day with passion, a plan and uses teamwork and just excels.”

Penn High School’s graduation rate has climbed to 97 percent under Principal Hope, teachers in all the Penn schools have received raises this year and the bond between students, teachers and parents is continuously growing.

“It just catapults us to a much higher level,” Thacker said.

When asked what drives the success at Penn high, Hope said it’s all thanks to his colleagues.

“This faculty really works so hard, so diligently, everyday to make sure every single student is supported,” Hope said.

Hope started working at Penn High in 1996 as an art teacher and is continuing to see success.

Thacker and Hope both said the community atmosphere at Penn High is thanks to its culture of excellence.