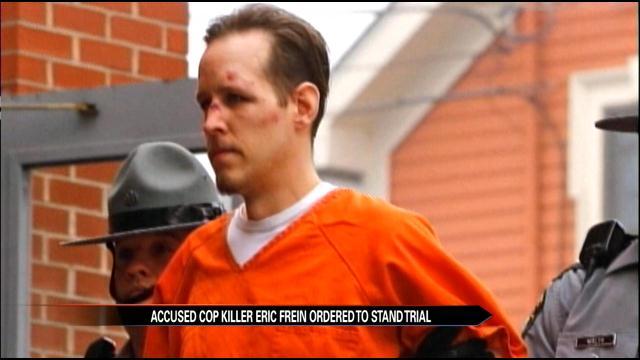 It was Frein's first public appearance since his arrest in October.

He is accused of shooting two Pennsylvania State Troopers in cold blood, killing one of the men.

When he was escorted into court, Frein was seen clean-shaven and wearing glasses—a stark contrast to when the 31-year-old appeared in court after being captured after 48 days on the run.

On Monday, Frein was stone faced with his legs shackled during his preliminary hearing.

“It is the start of answers to questions for the public, the victims, and their families,” says Pike County District Attorney Ray Tonkin.

In the courtroom, prosecutors showed chilling surveillance video, which was not released to the public.

The video shows Corporal Bryon Dickson being shot and falling to the ground after he was ambushed near the state trooper barrack's entrance in September.

Also shown in the video is trooper Alex Douglass rushing to Dickson's aid before he was shot.

While Dickson died of his injuries, Douglass is still recovering at his home.

Frein's defense team says their goal is to keep him from being sentenced to death.