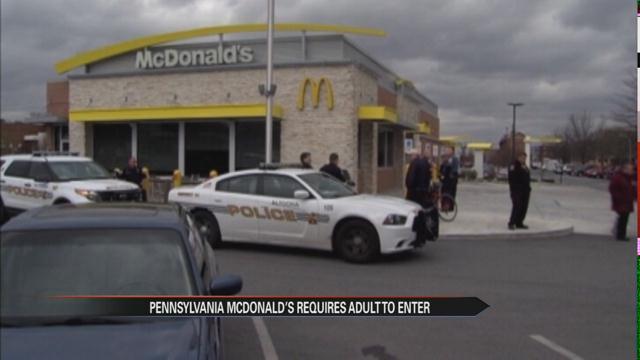 Some Central Pennsylvanians are not lovin' it when it comes to a McDonald's restaurant.

The fast-food chain franchise says it won't welcome kids or teens unless an adult accompanies them.

The notice was posted on a piece of paper on the door.

If you're under 18 years old and are without an adult, you simply cannot enter.

The restaurant says the top priority is the safety of customers, so it put the temporary policy in place.

Four male juveniles are charged with deviant trespass, simple assault, harassment and stalking after several recent incidents at the restaurant.

"We've received a number of complaints from some businesses along the 17th street, 7th Avenue area," said Lt. Jeffrey Pratt. "It seems like when we focus on one location and address one specific location, they move onto another area."

Police say students from nearby schools are getting together near local businesses.

Police will send out bike patrol units and extra officers to the area, hoping the problem goes away.

As for those four teens, they're set for juvenile hearings soon.