People coming from out of town to support Memories Pizza 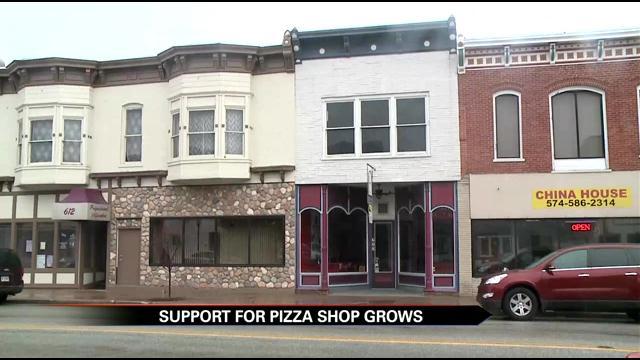 Many people have traveled to Walkerton, Indiana to show their support for Memories Pizza. Although some did not want to go on camera, they said they stand behind the owners of the restaurant.

Memories Pizza remained closed on Thursday, but several people showed up - just in case they did.

Supporters came from Portage, Indiana and Coldwater, Michigan to show their support.

“With the threats the pizzeria is getting on their phone lines, supposedly, they are getting so many phone calls they can't be open to sell pizzas tonight,” said Rick Jekel.

Jekel traveled from out of state to see this little town called Walkerton after seeing Memories Pizza on the national news.

On Tuesday night the owners of the pizzeria told ABC57 they would not cater a same-sex wedding if they were ever asked to.

“It's kind of interesting if you look at the other side? Who is talking about hate? It would seem that there's a lot of hate for an individual that never said they're not going to serve you,” said Jekel.

Jekel was shocked by the threats he saw on social media.

After the firestorm, a GoFundMe account was opened to raise money for the O'Conner family.

“These people are trying to make a living, but they have Christian convictions that no one should have the right to take away from them. The government doesn't have a right to do that. No one does," said Bilsborrow.

Walkerton Police say they have been busy analyzing threats that have been made against the O'Conners and their business.