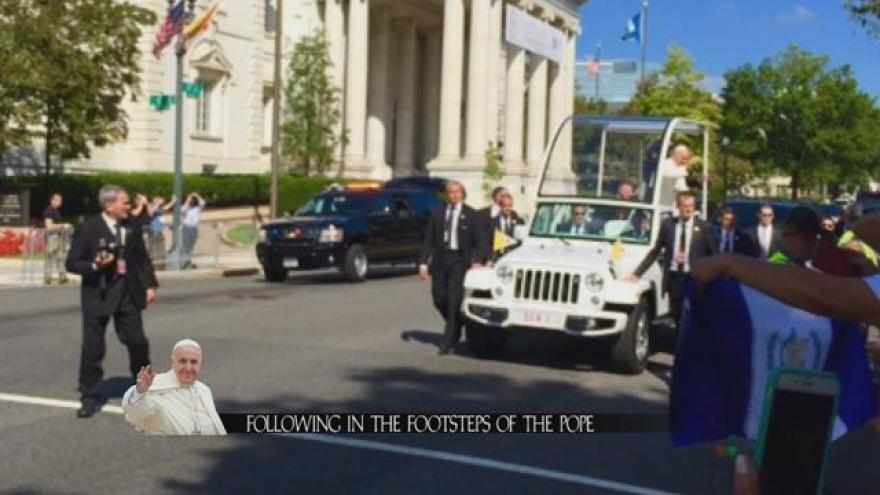 Pope Francis' first full day in America was a busy one. He started out at the White House and then went to St. Matthew's Cathedral for a meeting with the Bishops. Thousands lined the Pope's possible route, hoping to see him.

"I woke up very early at 2 in the morning and talked all the way here to see the Pope," said Carolyn from Maryland.

Carolyn started her journey early hoping it would pay off.

"When I got there were about 100 people in front of me and I thought I was first but there were other flock out there waiting for Pope Francis," Carolyn said.
It did pay off.

After waiting outside the White House, Carolyn found herself just feet away from the Holy Father.

"It was amazing. I was shaking my phone was crazy," Carolyn said.

Moments she was able to capture perfectly on her phone.

Later in the day, Pope Francis went to St. Matthew's Cathedral for a midday prayer with Bishops.

"This prayer is every hour at the church, everyday is the liturgy of the hours and its prayed in the middle of the day so the Pope is going to be with the bishops and others invited, and he address them as their pastor," said Father Daryl Rybicki, ABC57 special correspondent.

People lined up for hours hoping they picked the right route the Pope would travel.

"We spent the last hour trying to figure where he would come up. We knew he was at St. Matts and we knew he was at Ellipse but no one was saying how we would get from one to the other," said Keith Curtis.

Curtis landed on the right route and saw the Pope Mobile as it drove by.

"It was really exciting, you can see this tense moment where everyone raised their cameras and you can tell it’s coming, the limos start," said Curtis.