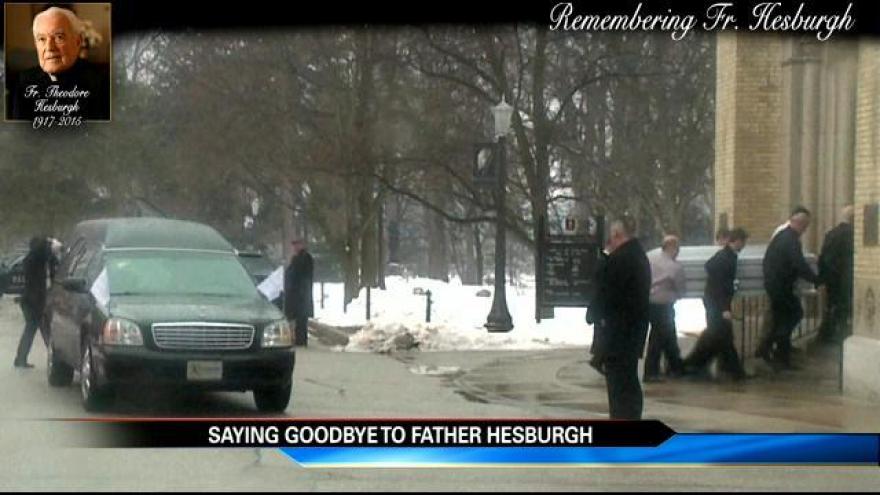 The mood was somber as Father Hesburgh's casket was carried into the Basilica of the Sacred Heart.

Though temperatures were cold and rain drizzled throughout the afternoon, some say nothing could keep them from saying farewell.

“He's a constant reminder of what we all strive to be. And I think it's very important for us to go to the visitation and remember him for the man he was,” said senior Ian White.

A statement echoed by former student Maria Dipasquale. She said the late Father Ted had a direct impact on her life.

“He's a towering figure for the history of Notre Dame and especially for someone like me, a woman. When I was born women weren't admitted at Notre Dame. And so by the time I went to college I was able to attend Notre Dame and that made an incredible difference in my life," said Dipasquale.

White reminisced about the yearly visits Father Hesburgh would make to his residence hall.

“He would just kind of go on about his incredible experiences and then we'd smoke a cigar with him. So he's had a very personal impact on my life and it was great to get to know him,” White said.

Everyone seemed to feel a connection.

“Our freshman year here, 1987, was the year he retired. So I think it means a lot to us,” former student Arnold Phifer explained.

They hope his legacy carries on.

“Father Hesburgh first of all is one of the most influential people Notre Dame has ever been witness to,” White said.