People struggle with no power 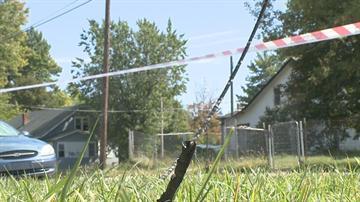 Electricity is sporadic throughout Benton Harbor, on Sunday afternoon some houses had power while their neighbors did not.

In other areas, there were larger pockets of outages.

Near the corner of Ohio Street and Lake Avenue was a patch of five to six houses that were all without power.

“We ain’t had power in four days and really it don’t make sense,” Earnestine Swanson said outside her brother’s home.

Thursday night ferocious winds swept through, the powerful gusts took down trees and electrical lines cutting power to thousands of homes and businesses in Michigan. A primary wire on Lake Avenue was snapped in half; part of it still hangs down draped in the field across the street from where Swanson sat.

“I don’t see them working on nothing, you know trying to fix nothing.”

Swanson said crews came out on Friday to hang caution tape in front of the wire, but no one has been back since.

She’s only seen trucks drive by, “But that’s how Benton Harbor is…maybe they’ll get to it tomorrow or the next day or who knows,” Swanson said.

In a circle of friends and neighbors, the other women agree. “I’ve been praying every day, thinking ‘well, maybe tomorrow it’ll get fixed,” Valerie Seawood said.

Seawood lives just up the street, but she came out to talk and soak up some sun. “Because there is no heat in our house, we have to be out here,” Seawood said. “This is the only way we get heat.”

Dressed in hats and jackets, the women said it’s warmer outside than it is inside their homes. “It’s so cold in my house I have to walk around with gloves on,” Seawood said. “…I can see my breath in there.”

“Trying to finish up my homework, so I can get in turned in on Monday,” Duvall said.

The battery on her laptop just died so she had to take notes by hand and sit in lawn chair outside.

Duvall said, “I’m not surprised, they always come here last.” Indiana-Michigan Power had about 30 trucks out in Benton Harbor Township on Sunday.

“Usually storms are pretty condensed, but this was really wide-spread,” Boyd said.

“Now we’re just working our way through the smaller pockets and the individual services.”

The last day or two of repairs always take a bit longer because each job only restores power to a handful of houses.

Boyd said it could take an hour just to get electricity flowing to one house.

Despite the time consuming repair, Boyd said right now, Indiana Michigan Power is on track to get power fully restored by 4 p.m. on Monday.