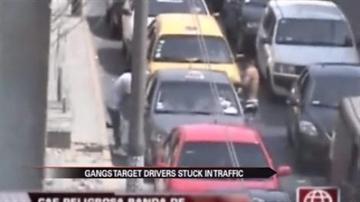 PERU -- Sitting through traffic can be irritating but in South America it is becoming dangerous.

A gang in Peru who call themselves "coyotes" pounce on drivers who are stuck in traffic and cannot get away.

These "snatch and grab" robbers come out of nowhere and reach right into the vehicles trying to grab belongings.

They seem to primarily target taxis but passengers in other vehicles have also been robbed.

"I tried to hold on to my purse, but then I noticed that they were armed and let go," said a victim.

After weeks of surveillance, police caught the suspects who they say stole around $45,000 from their victims.