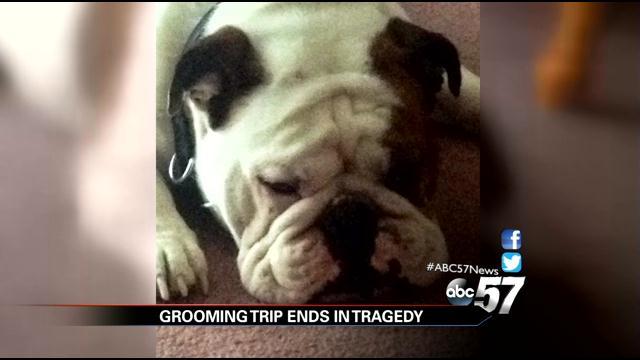 A Niles, Michigan couple says they took their dog to get his nails clipped and he died shortly afterwards.

Terry Archer and Sheri Mills took their four year old English Bulldog Bubba to the PetSmart in Mishawaka for the nail clipping.

"We were looking forward to a good day together. We were going to go buy him some new toys, take him to get his nails clipped, and go for a walk on the beach later," said Archer.

When Archer and Bubba got to the store, they walked around the store while Archer picked out new toys for his dog.

Then he decided he would go by the salon before he and Bubba left.

"It all happened within a matter of about five minutes, at least that's the way it seemed in my mind," Archer said.

He recalls there being about five to seven dogs in the grooming salon when Bubba was taken in by the groomer.

Archer stood and watched through the window.

"I'm watching the girl in the back and she says, 'Hey I need some help, can somebody please hold the dog?' So another girl walks back there and I see her lay over the top of Bubba, Bubba's laying on the table, arm around my neck and lays around the top of him,” Archer added.

The next thing he knew he was carrying Bubba's lifeless body out of the store and riding in the car with the groomers on the way to the emergency vet clinic where he was pronounced dead.

“I had his lifeless body in my arms and he was just limp and hanging over," he said.

Archer and Mills said they have never had a dog like Bubba before and see him as just another member of the family.

"We've never fallen in love with an animal like we did with him. I've never hurt so bad about losing an animal than we do with him. We loved our dog, he was a family member," said Mills.

The couple said that PetSmart expressed condolences to them for their loss a few days after it happened.

PetSmart also released a statement, that said: "At PetSmart, the health and safety of the pets in our care is our top priority, and we are truly saddened by the loss of Bubba. An investigation is underway, but our initial review indicates that our associates acted appropriately by helping the pet parent find the nearest open pet emergency center. We require all of our pet groomers to complete an extensive training program and an annual safety certification. We believe that a continued focus on high standards is an effective way to hold groomers accountable and promote safety in our salons."