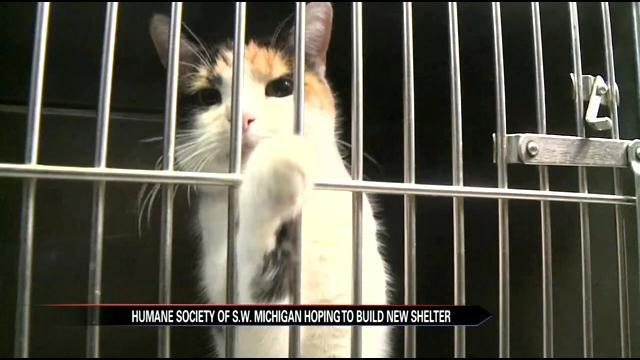 A pet rescue is searching for funding to build a larger shelter on M-139 in Royalton Township. The Humane Society of Southwestern Michigan is trying to raise $2 million to provide homes for the animals.

One 85-year-old who lives in Benton Harbor adopted her Pomeranian from the shelter. She hopes people in the community will donate to the fund because she believes more people will find a companion like she did.

Irene Cerecky said, "Anyhow, my two dogs Shelly and Dixie Lee are wonderful company to take the loneliness and depression away from me."

Cerecky said the dog has several health issues, but they are working through it together.

Cerecky said, "She has little accidents so I got her a little diaper over there, but she runs me to death! I can't go wherever she wants to go, she just wants to keep going.”

The board president at the Humane Society of Southwestern Michigan said this is the only no-kill shelter in Berrien County.

Don Blackmond said, "We do not receive any state, federal, or local funding from the government so all the money that we require to operate our shelter has to come through private donations.”

Blackmond said the shelter is always at full capacity, and there's only one bathtub to wash all the critters in. One of many reasons why they are asking the public for donations. They hope to build a 15,000 square foot facility if they can find the money.

Blackmond said, “We currently have a monthly budget for operating expenses of about $25,000 so in order to keep our doors open, we have to raise $25,000 each month and then on top of that we are attempting to raise $2 million to construct our new shelter.”

Blackmond said the shelter turns away nearly 25 dogs and cats a week. They just  received a grant from the Schalon Foundation, and they will match your gift up to $50,000 until late February.

Donations and more information can be found here: http://www.humanesocietyswm.org/-/MAIN/donations.html