Peters and Novosel selected in first round of 2012 WNBA Draft 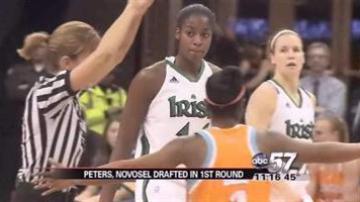 NOTRE DAME, Ind. --The Fighting Irish may have had a disappointing loss in the fight for the national title this season, but the Notre Dame woman's team is far from unsuccessful.

During Monday's 2012 WNBA Draft in Bristol, Conn., two women from the Irish squad were drafted in the top eight.

With two national championship appearances, the Fighting Irish duo yet again made history for the school. Peters and Novosel became the first Notre Dame players to be drafted in the 1st round since 2001.

Devereaux Peters was the 3rd overall pick during Monday's draft. The university said Peters is now the highest-drafted player in the program's history.

Not far behind her was Natalie Novosel, who was the 8th overall pick.

Notre Dame was one of only two schools to have multiple players taken in the 1st round of this year's WNBA Draft.

The fifth-year senior said she was shocked when she heard her name. Notre Dame's all-American forward, Devereaux Peters, will now be joining the reigning WNBA champion's team, trading in her Fighting Irish jersey for a Minnesota Lynx jersey.

"It's just simply amazing. I never thought I would be at this point, especially going through those knee injuries. It's just a blessing and I really can't explain how it feels right now," said Peters.

Notre Dame calls it a milestone, who has not seen one of its players drafted since 2008.

Peters will hit the court with her new Minnesota teammates May 10th during the team's first preseason game. After that, Peters will face Ruth Riley, who was previously Notre Dame's highest-drafted player.

Novosel will make her debut with Washington when the team squares off against the Chicago Sky this summer.