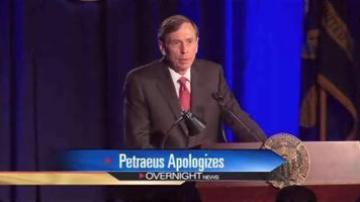 LOS ANGELES — Former CIA director David Petraeus made his first public appearance since resigning from his post in November. Petraeus has been quiet since he admitted to having an affair with his biographer.

At a speech in Los Angeles on Tuesday night, he apologized for the extramarital affair.

"Please allow me to begin my remarks this evening by reiterating how deeply I regret and apologize for the circumstances that led me to resign from the CIA and caused such pain for my family, friends and supporters," said Petraeus.

A source close to the former director says he is considering whether he wants to be represented by a speaker's bureau for future speeches.