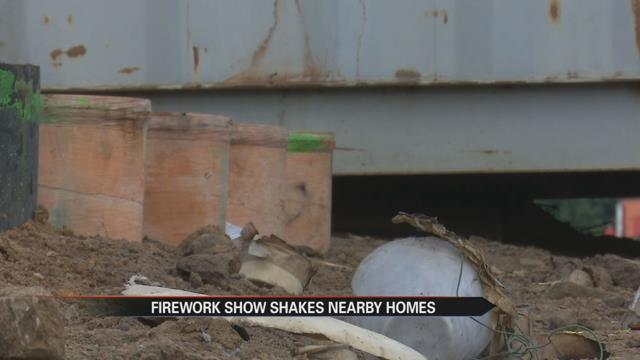 The Pyrotechnics Guild International convention is back in La Porte this week.

It brings a boost to the local economy but also some problems for nearby residents.

Every day from 4pm to 1am, La Porte resident Joe Haney hears fireworks going off all week during the PGI convention.

“People need to understand this, the concussive effect from some of these devices is going off about 10% of what they’re doing,” said Joe.

The 10 percent he’s talking about is the 16-inch shells that PGI shoots off during their bigger shows.

PGI 2016’s convention host, Tim Walczak, says they do their best to be proactive and work with the public the week of the convention.

“We go beyond the NFPA standards by going 100 feet per inch of shell, so if we shoot a 16-inch shell, we have 1600 feet in all directions before we interfere with anyone’s house or anything like that,” Tim said.

But Joe Haney mapped out the distance of PGI from their house, and he says it’s closer.

Joe says he brought this information to city commissioners and PGI. He says commissioners seemed surprised, and PGI apologized and suggested he take down valuables hanging on the wall.

“The vice president told me to remove things from the walls, any china from your shelves take off your shelves, because the direct line of sight and vector will be coming right toward your house due to the proximity of it,” Joe said.

So he did that, but he doesn’t think he should have to experience such big shocks.

“Our chandeliers within our house actually bounced. The back half of our house is basically all glass, and windows there bowed in somewhat from some of the heavier devices they lit off,” Joe said.

But PGI says unfortunately it comes with the territory, and they’ve done studies that say the blasts shouldn’t affect the foundation.

“We’ve put sensitivity meters around so we know what our explosions will do… Yes [it] will probably rattle some houses, but it’s not going to break anything,” said Tim.

Plus, Tim says, the convention brings a huge boon to the local economy. Last time they came in 2012, they brought in almost $3 million. This year they’re hoping for $4 to $5 million. Joe even said he appreciates the economic impact.

“I’m not opposed to the convention in general. I think anything we can do to bring business into La Porte county in general is a good thing, and as a small business owner myself, I strongly feel that way,” he said.

He just wishes the convention was a little farther away.