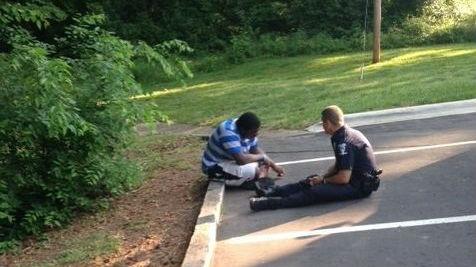 (CNN) -- There's little doubt a scene like this is repeated multiple times a day all across America. But it's rarely captured on film.

That's probably the reason why a photo of Charlotte-Mecklenburg police Officer Tim Purdy talking things out with a potentially suicidal teen with autism has wracked up thousands of shares online.

The incident happened last week in North Carolina. The teen had wandered away from his high school campus.

Purdy knew the teen had a history of violent behavior.

Then, the teen sat down. And to create a connection with him, Purdy followed.

"I got down on my knees and kind of made that eye contact," he said. "We just started talking and it went from there."

They talked about school, about family and football. Pretty soon, they were both laughing.

"This is something that tens of thousands of law enforcement officers that are out there do every single day," Purdy said in a video. "You just don't hear about it."

The police department posted the photo on its Facebook page last week. Since then, it has been shared more than 250,000 times.

For Officer Purdy, "this is a great opportunity to showcase autism."

Among those applauding the officer's actions is Lindsay Naeder with Autism Speaks, an organization dedicated to funding research and increasing awareness of autism spectrum disorders.

"We at Autism Speaks are excited to see this officer go the extra mile," Naeder told CNN. "We usually see a negative story go viral."

She said the officer's approach -- trying to establish eye contact -- was key.

"It's very emotional. You can really see it means a lot to that young man."

It's common for people with autism to wander away from a safe setting such as school, Naeder said. They may also face other challenges, such as depression and anxiety.

"All of those situations can place the autism community at great risk," she said.

Autism Speaks maintains a nationwide initiative to train first responders, providing them with guidelines for communicating with people with autism in emergency situations.

It also provides services to individuals with autism and their families.