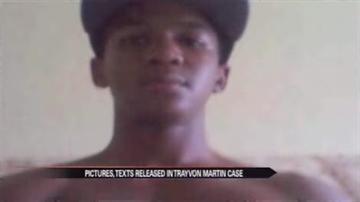 New evidence in the Trayvon Martin case has been released.

Pictures and text messages from the teen's phone have been made public by George Zimmerman's defense attorney.

They suggest the teen was no stranger to pot, guns, and fighting.

"I'm not sure if it's recreation or whatever, but he's very used to fighting. That he has used some drugs in the past, and again, many 17-year-olds have, but he has as well," said Mark O'Mara, Zimmerman's defense attorney.

The Martin family attorney says the messages and images are irrelevant.

It is possible a jury will never see this evidence but Zimmerman's attorneys say they are prepared if prosecutors attack Zimmerman's character.