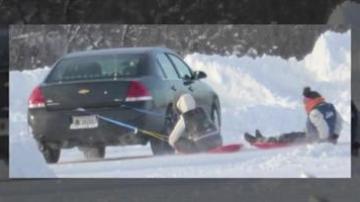 SOUTH BEND, Ind. -- Pictures taken by an ABC57 viewer show someone driving an unmarked police car pulling two kids on sleds behind the car. We took the photos to the South Bend Police Department for more details.

The pictures were taken at the LaSalle Intermediate school by viewer Gary Morseau Sr.

Captain Phil Trent of the South Bend Police Department said the photos were sent to him and the incident is under investigation.

He also said family members are allowed to ride inside police vehicles, but what was depicted in the photos was not appropriate.