Pier in St. Joe set to close for lighthouse restoration 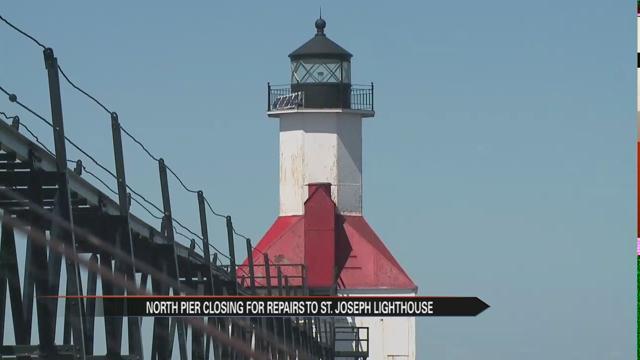 The North Pier in St. Joseph will be closed in the summer for a lighthouse restoration project.

Ray Evans fishes by the St. Joe lighthouse every day.

He was all smiles on Thursday because he caught a bunch of trout off the pier. Evans said he's bummed that he will have to fish on the south pier now since the north pier will be closed around June 8th.

Evans said, “Yes I will. I'll fish the other side but it will get crowded over there.”

Robert Judd, the chairman for the Lighthouse Forever Fund said if they raise enough funds, the project will include an accessible catwalk, and they plan on refurbishing the interior of the lighthouse to how it looked in 1932.

Judd said they are still fundraising.

Judd said, “We've got a good start, we're a little over 1.7M our goal is 2M we're not sure exactly how much of that we need but we're waiting on bids to come in during May!”

Judd said right now they are in the process of selecting a construction team(s).

Judd said, “So for the construction period, that will start in early June, until they're done sometime in October, it's for a better cause! You'll be able to come here and look at and go up to the dune and look at it!”

So will the closed pier affect local businesses this summer? That's the question I asked the owner of Schu's Bar and Grill in Downtown St. Joseph.

Jim Kramer said the lighthouse is a staple in the community, so he understands why they are preserving it.

Kramer said, “It's one of those things we have in St. Joe that sets us apart and having it closed I think it will affect business a little bit but we continue to have Silver Beach which is amazing!”