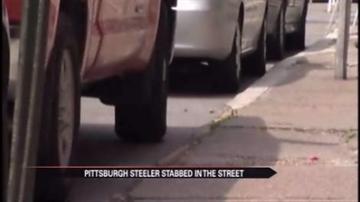 PITTSBURGH —  A restaurant owner helped a Pittsburgh Steelers’ player after he was stabbed during an attempted car-jacking.

Police say the 23-year-old man was walking to his truck when three guys attacked him. They pointed a gun at his head, and then stabbed him twice.

They got away as the young man stumbled into a nearby restaurant for help; a place where he was well known.

"He said, 'They stabbed me.  I can't believe it, they stabbed me,'" said Daniel McSwiffen. "I said, come on inside Mike, we'll dress your wounds. I told my wife, grab the first aid kit.  Take care of him."

He is expected to be okay.