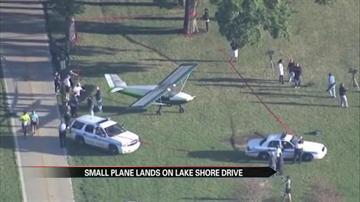 CHICAGO — Chicagoans got quite the surprise Sunday morning when a small plane found an unusual landing strip: Lakeshore Drive.

The pilot landed on the highway after a part broke loose on his plane. That caused the aircraft to shake violently.

The 51-year-old electrician was the only one inside the plane when he started having problems about 20 minutes in his early morning flight.

"I was just doing a routine flight, a recreational flight. I was over Willis Tower, and all of a sudden, 'boom,'" says John Pedersen. "I'm on the ground. I'm alive. That's history. That's my God looking out for me."

The pilot, who's been flying for five years, suffered only minor injuries in the landing.

With impeccable timing he landed as traffic sat at a red light.

Crews pushed the plane onto the grass in front of Buckingham Fountain.