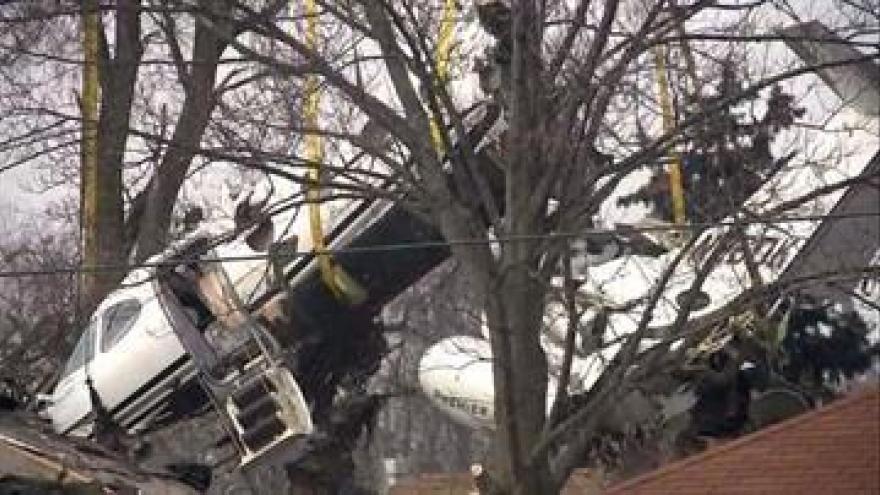 SOUTH BEND, Ind. – Multiple agencies are working to get the North Iowa Street neighborhood back to normal after a plane crashed into three homes Sunday afternoon.

Crews brought in a crane and secured straps to the wreckage that was once a two engine jet.

"I just can't imagine just being there and somebody in the house and just amazing, all the damage and it's just beyond me,” said Beverly Smith.

The crane dislodged the jumbled wreckage from what used to be 1614 North Iowa Street.

The twisted debris dangled above the destroyed home for several minutes before it was split in half and lowered in pieces onto a waiting flat bed truck.

For the first time since the crash, the plane resembled its original structure as it was carried away on the truck to be taken to a hangar at the South Bend Regional Airport.

All that’s left is a gaping hole in the house where the plane landed.

The National Transportation Safety Board says the cleanup effort will be handled by local authorities.

Iowa Street has been reopened to the public, but the area around the three homes damaged by the plane will be closed off until the NTSB has determined it has all the pieces of the plane.

Four people were aboard the Hawker Beechcraft Premier 1 when it crashed after multiple landing attempts at the South Bend Regional Airport Sunday afternoon.

On the plane, two people died and two were injured. One person on the ground was also injured.

The other passengers are still at Memorial Hospital. 58-year old Jim Rogers is in serious condition and 36-year-old Chris Evans is in fair condition.

Diana McKeown, who was on the ground, is in fair condition.