Planes soar and somersault at the Warsaw air show 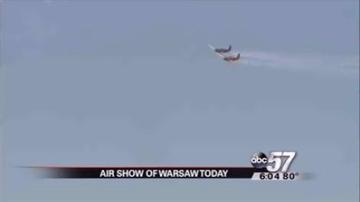 WARSAW, Ind.-- Seven thousand people showed up for the Warsaw air show. It was the first time an air show was here in over fifteen years and they hope to make it an annual event.

Acrobatic pilot Patrick McAlee said he has to train his body to handle the G Force he experiences while somersaulting through the air.

He said it could be the difference between passing out and staying awake.

McAlee said, “I do about 6 to 8 G’s positive about 65 times in my routine. Every time you pull in and out of a maneuver and there’s roughly 25 to 30 maneuvers. I do about 4 to 5 negative so that force is trying to throw me out, and the positive is trying to pull me in.”

McAlee said, “The way our performance area was set up was kind of unique. It’s an L shape so we can play with the crowd line a little more. And a lot of turn out, this is great.”

McAlee said it took a lot of training for his body to be able to handle those high speeds.

Long said, “I’ve never done anything like that. I’m not used to going straight for that long. I’m used to going in circles. It was an awesome experience and an awesome crowd out here and for Warsaw to ask me to do it is really big.”