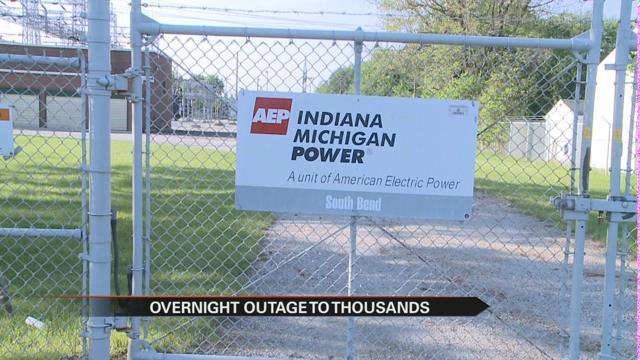 The boundaries are approximately Twyckenham to Hickory, east to west, and Douglas to Corby, north to south.

After sporadic power outages throughout the week, Indiana Michigan power discovered a vine growing out of control on some sub-station equipment.

Steps will be taken to remove the vine and replace the pole it's surrounding.

For bars in the outage area, the 2 a.m. blackout means earlier closing times.

“Usually we have a good crowd and especially since the weather's nice a lot of people come out and hang out on the patio,” Irwin said.

Kathy and Shane Sult are less concerned about the outage, because they will be asleep.

Their neighborhood is right next to the sub-station.

“I got a message on my cell phone,” Kathy said.

According to Indiana Michigan Power, all residents set to experience the planned outage have been notified via phone.

“That's fine as long as they made it very clear to us and that's what they've done,” Shane said.

Remember to charge cell phones and use cell alarms or battery-operated alarms to wake up in time for work.
Share this article: