Plow trucks are ready for the snow to hit South Bend 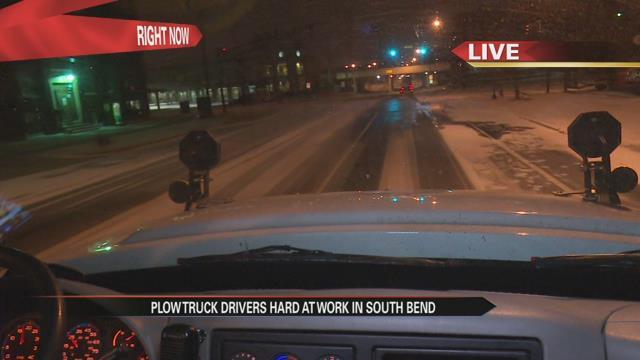 We’re checking out the streets for you as the first significant snowfall of the season hits Michiana. ABC 57’s Jess Arnold takes you on a ride in a snow plow truck to find out how the city’s handling the streets of South Bend.

“Well in conditions like what they’re calling for, we’re usually proactive,” said the Superintendent for the Street Department, Coby Deal.

They’re already spreading a 50/50 sand-salt mix along the roadways.

“That way, we’ll get some traction if we do get some slip spots, slippery spots, and the salt to melt any ice,” said Deal.

The night shift starts at 7 p.m. and won’t end for another 12 hours.

“It’s a learning curve for everybody at this point. With all the new curbs and islands and stuff down there,” said Deal.

They ask that cars don’t create more obstacles for them.

“We’re usually two, three trucks, sometimes six, out on the bigger roads deep. We just ask that cars not come and fly in between us because the visibility is almost zero at times,” said Deal.

At the end of the day, they’re all focused on one thing.

“We just try to keep things safe for everybody,” said Deal.