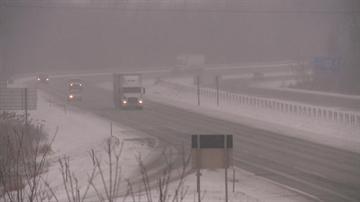 STEVENSVILLE, Mich. – Crews kept a close eye on accident ‘hot spots’ Friday when snow battered down on Southwest Michigan. ‘Peutz curve’ was high on the list.

"We’re approaching it right now," said Dan Sullivan, Chief of the Lincoln Charter Township Police Department. Sullivan knows how dangerous ‘Peutz Curve’ can be. "Its unique that there's such a tight turn in a freeway."

The curve is a small stretch of I-94, it’s one of the sharpest turn I-94 makes in Michigan and it’s notorious for accidents. "I’d say most police officers, EMS, and firefighters would say we work a significant amount of crashes there,” said Sullivan.

In 30 years of patrol work in the area, Sullivan estimates that he's seen hundreds of crashes on ‘Peutz Curve’. The most recent was a semi rollover in October. The driver in the accident was killed.
The sharp curve gets even more dangerous during snow storms similar to the one Friday.
Michigantrafficcrashfacts.org shows in 2010, the most recent data available, 14 accidents occurred at the curve. The majority were in winter.
"We do what we can to keep the motoring public moving,” said Terry Steinbeck with the M-DOT garage in Sawyer. He said sharp curves like ‘Peutz Curve’ get special attention and extra salt.
Stinebeck said accidents aren’t always caused by conditions. Speed also plays a factor. "Sometimes even though the speed limit is 70 (mph) some of the curves you shouldn't take too much faster than that,” he said. "If the road is snow covered and slippery, you don't have to go the speed limit," said Sullivan.
Share this article: