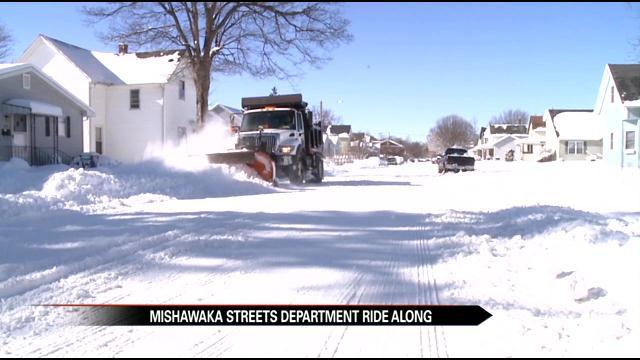 The Mishawaka Streets Department spent all day clearing the roads of snow. According to the street commissioner, all main and secondary streets should be clear of snow by Tuesday morning.

The plow trucks are in full force plowing snow and dropping salt.

Some are happy to see you, others are mad you plowed them in but we have to do something with all this snow,” said Art Krol of the Street Department.

We rode along with one driver to see what they're up against.

Mishawaka has 170 miles of roads that must be cleared when there's a snowstorm.

It has been a challenge.

“The amount of snow we had in that period of time was just hard to keep up with,” said Tim Ryan, Street Commissioner.

Main roads take priority. From there they plow the residential and side streets.

They say snow was falling so fast on Sunday it was difficult to fully clear the main roads.

Monday they had to play catch up.

They do have one request for people whose cars are parked on the street.

“I always say if you have a driveway please use it until we come by and get everything cleaned up because the more cars parked it makes it harder for us to get back to where we need to go and then we got to come back and clean up where the cars finally have moved,” said Ryan.