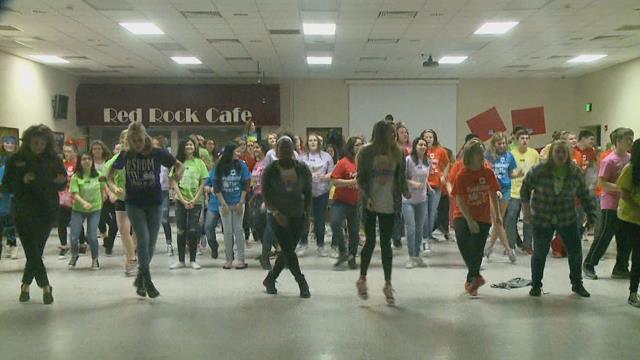 Nearly 200 Plymouth High School students came together Saturday afternoon to dance for a cause.

“It’s an all-day event where we stand on our feet for those who can’t stand for themselves,” Plymouth High School Junior Travis Owen said.

Students came together for a yearly dance marathon that benefits Riley Children’s Hospital in Indianapolis.

“I am actually a ‘Riley’s kid,’” Owen said. “So it really touches home where they’re helping kids that just were in your same position.”

Owen, who’s on the executive board for the dance marathon, shares a special connection with the cause the event supports.

“I was a kid that had brain surgery at Riley’s Children’s Hospital and they helped me through that difficult time,” Owen said.

That was in first grade, but now, Owen is healthy and giving back to a place that gave him so much.

“Just [giving] back to those who have helped me before,” Owen said.

Along with dancing for about eight hours, students heard from patients from Riley Children’s Hospital who came to tell their stories.

“During that time we take a knee for them and that’s the only time where we get to rest,” junior Natasha Craft, who danced in the event, said. “We can’t sit down; we can just take a knee.”

But other than those few moments, the students danced all day long – even practicing a routine to perform at Saturday night’s varsity basketball game.

“I wanted to get involved because it’s really fun,” junior Taylor O’Neal, who danced in the event, said. “I’ve done it in the past years and it’s just awesome to raise money for, like, a good cause.”

A cause that Owen said is well-worth a day of dancing.

“I witnessed it firsthand when I stayed [at Riley’s] overnight for my brain surgery,” Owen said. “And [the hospital staff was] there. They gave me a stuffed animal that I kept right by my side; never let go of it. It’s very nice to have people that are there for you and care.”