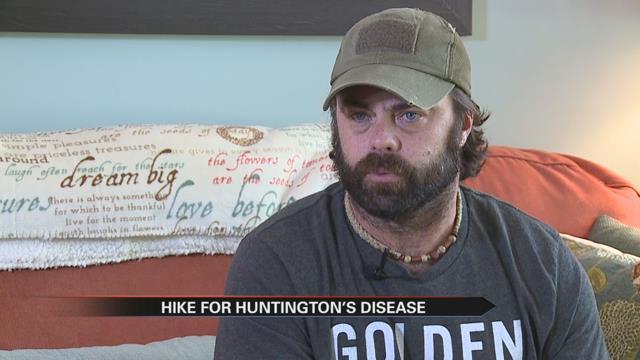 41-year-old Joshua Wakeland of Plymouth, IN is a Marine Corps veteran and a father of three.  Three years ago he discovered that he has Huntington’s Disease.

There’s about 30,000 Americans diagnosed with Huntington’s and more than 200,000 at risk of inheriting the disease.  Once the disease becomes active it’ll slowly deteriorate a person’s physical and mental abilities during a 15 to 20 year span until they need full care.

It’s described as having ALS, Alzheimer’s, and Parkinson’s all at the same time.

Josh’s first experience with Huntington’s was about 25 years ago.

“My dad’s sister was diagnosed and I was unfamiliar with it.  But as she progressed, we found out my dad’s other sister had it as well,” said Josh.

Josh and his family took care of his aunt’s daily needs such as grocery shopping and help with hygiene as her symptoms became more severe.

“She began with some difficulty in speech and a lot of uncontrollable movement that just seemed out of place,” Josh said.  “The speech slowly started to go and the progression for her was about 15 years until she passed away.”

Both his Aunt Judy and Doris died within weeks of each other in 2012.  After taking care of his Aunt Doris he began to wonder if he had the disease as well.

“I decided to have the DNA test done and found out three years ago I was positive,” said Josh.

Since the disease is hereditary, his three boys, Taylor, Timmy, and Andrew, are at risk of getting it.

The symptoms are broken down into three categories:  behavioral, cognitive and movement.

It affects your short term memory, balance, giving you uncontrolled movements.  It also gives you mood swings and messes with your ability to stay focused.

Josh carries a card in his wallet that explains why he may act the way he does.

“With the muscle movements you get looks,” Josh said.  “I remember a lot of stares their way.  It can cause problems with law enforcement even because you seem intoxicated at times by your movements.  I know that was one of the things that with my aunt especially is that when we go to eat it was a challenges and you get used to it but it’s definitely something different to have people looking and wondering what’s wrong but I look at it from a different perspective now.”

He plans to help bring awareness to this disease by teaming up with Jason Evans who also has Huntington’s Disease and is also an advocate for the disease.

Jason lives in Oregon and has done a hike for Huntington’s before.  He hiked the Pacific Crest Trail in 2014.  This year he is hiking the Continental Divide Trail which is thirty one hundred (3,100) miles long.

Josh met Jason through the Huntington’s Disease Society of America (HDSA) Facebook page.  Josh saw some of Jason’s photos from the first hike and decided to reach out to him.

“He just happened to be in an area that had reception and messaged me right back.  And said I’d love to keep doing what you’re doing, glad you’re doing, wished I could be there and he said why aren’t here?” said Josh.

Josh hit the road on August 5th where he will meet up with Jason in Dubois, Wyoming. On August 12th he will begin hiking the rest of the trail with Jason.

“Knowing that there’s a chance that this can be passed on has had a drastic effect on my life, which is why we’re doing what we’re doing right now which is to create the awareness and they’ve made great strides but we need a cure,” said Josh.

They hope that over time more people will join in on the hike to bring awareness to Huntington’s Disease.