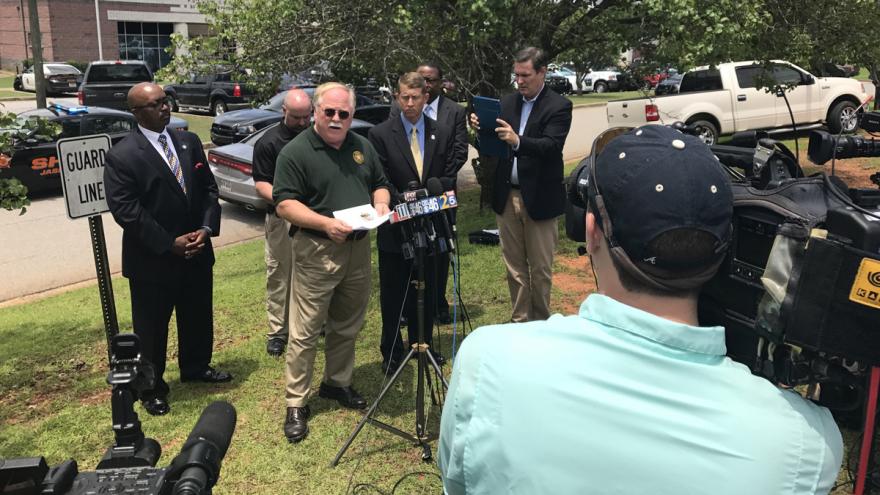 (CNN) -- A manhunt is underway for two prisoners after at least one of them shot and killed two corrections officers transporting them on a bus Tuesday morning in central Georgia, authorities said.

Donnie Russell Rowe, 43, and Ricky Dubose, 24, were on a state corrections bus with 31 other inmates when the pair somehow got out of what should have been a locked, gated rear section about 6:45 a.m., officials said.

Rowe and Dubose entered the driver's compartment and overpowered and disarmed Officers Christopher Monica and Curtis Billue while the bus was on the two-lane State Route 16 between Eatonton and Sparta, Putnam County Sheriff Howard Sills said.

At least one of the prisoners shot and killed Monica and Billue, Sills said.

"They are dangerous beyond description" and believed to be armed with the officers' Glock pistols, according to the sheriff.

"They need to surrender before we find them," Sills told reporters Tuesday afternoon.

The other prisoners were still on the bus, with doors closed, when authorities arrived at the scene, he said.

The sheriff was emotional as he recounted what he saw when he arrived on the scene.

"I saw two brutally murdered corrections officers; that's what I saw," Sill said. "I have their blood on my shoes."

The Oconee County Sheriff, whose jurisdiction is north of where the killings occurred, wrote a post on Facebook to the escaped convicts.

"Donnie and Ricky, I hope you are reading this. What is done is done. However, I am asking you to surrender yourselves to the nearest law enforcement officer as soon as possible. You made your escape, but you won't be out long. ... There is no one you can trust ... and nowhere you can go that we won't find you," the sheriff wrote.

Gov. Nathan Deal said the state will use all available resources to track the fugitives down.

"Today, two families lost everything in a heinous and senseless act of violence perpetrated at the hands of cowards," Deal said. "Our heartbreak is matched only in our resolve to bring their murderers to justice."

A $60,000 reward is being offered, the FBI office in Atlanta tweeted.

Bus was going from one prison to another

Monica, 42, and Billue, 58, were transporting the inmates from Hancock State Prison, in adjacent Hancock County, to the Georgia Diagnostic and Classification Prison, some 45 miles west of Eatonton, Georgia Department of Corrections Commissioner Greg Dozier said.

Rowe and Dubose most recently were inmates at Baldwin State Prison in nearby Milledgeville, the corrections department said. It wasn't immediately clear why or for how long they were at the Hancock prison, or why they were being taken to the diagnostic prison.

Investigators are trying to determine how Rowe and Dubose got free and reached the officers, Dozier said.

Video cameras were on the bus, and investigators will review the footage, the sheriff said.

It is standard protocol to have two officers -- armed but not wearing ballistic vests -- transport prisoners on a bus, Dozier said.

Monica, a sergeant, worked for the department for almost eight years and leaves a wife. Billue, a 10-year employee, is survived by a father, a brother and a sister, Dozier said.

Rowe, who is 6 feet 1 inches tall and 181 pounds with blue eyes and brown hair, was serving a sentence of up to life in prison for armed robbery and aggravated assault in a 2001 case, according to the Georgia Department of Corrections website.

Dubose, 6 feet 1 inches tall and 140 pounds with blue eyes and brown hair, was sentenced up to 20 years in prison for armed robbery, aggravated assault and theft in 2014, the website shows. He also was convicted of theft and identity fraud in cases from August 2010.

The other prisoners on the bus were taken to the sheriff's office where about 3 p.m. some of them were put on another corrections department bus. Two guards with long guns watched as the prisoners, wearing cuffs on their ankles and wrists, shuffled toward the transport.

Eatonton, Putnam County's seat of government, is about 65 miles southeast of Atlanta.

CNN's Tina Burnside and Nick Valencia contributed to this report.