Police appreciation day in hopes of resolving disconnect with community 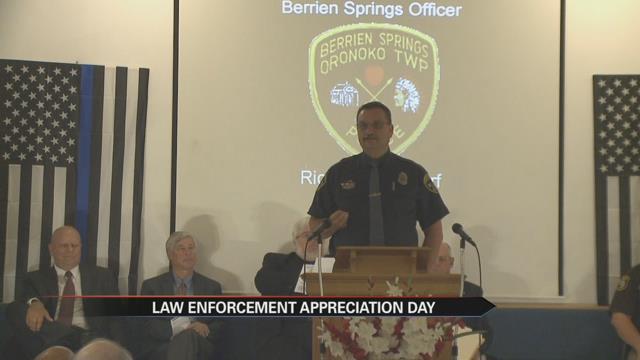 On Sunday, Michigan’s oldest Baptist church held a celebration for the men and women who protect and serve the Michiana community. But recent incidents involving police brutality all over the nation have sparked doubts on how police handle their options.

Nationwide there are strong tensions between police and their communities. Officers from the Berrien County Police Department spoke in front of their community to state they’re here for them.

Sheriff Paul Bailey said all of the police agencies work closely with their communities helping them build trust and communication, but he did explain what he thinks should be done about racial tensions in our country.

“We need to come together and talk about why we think there are those divides, why do we think the criminal justice system doesn’t work for everybody because it does,” Bailey said. “This is a great country. Are there some flaws that we need to fix?”

Rick Smiedendorf, a community officer, said his job is only successful when the community pitches in their ideas and gives them feedback, but sometimes difficult decisions have to be made.

“We have to foster that relationship to get good information to get good tips in so we can do the job that our residents want us to do, which is keeping them safe,” he said. “And sometimes we have to make actions that other humans may not want us to.”

Smiedendorf says this first appreciation day is a start to helping ease the disconnect people might feel toward the law enforcement.

“The more people know what we do, how we do it and why we do it, the stronger our relationship within the community will be,” Smiedendorf said.

And now Bailey is working on a solution to break that disconnect.

“Community policing is getting out and talking to different groups about what they expect out of law enforcement,” Bailey adds.

This event was planned shortly before the Berrien County Courthouse shooting and that’s when Pastor Derek Cromwell realized the need for a simple think you.

“It’s become less and less that they’ve gotten the respect that they deserve for the work that they do. We want our officers to know how much we appreciate them,” said Cromwell.

Pastor Cromwell hopes this becomes an annual event because it brought people from different areas in. He hopes to be able to spread this appreciation day all throughout Michiana.